The World Association of Professional Investigators (WAPI) – founded in 2000 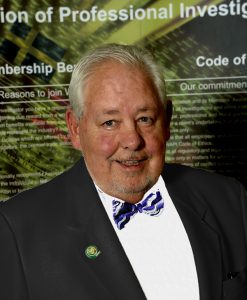 The New Year, 2021 marks the twentieth anniversary of the passing into law of the Private Security Industry Act – PSIA.

Perplexing is the fact that the UK Investigation Sector was excluded from this regulation which had been years in the making. The time and cost of creating this legislation and the resulting Quango to enforce the regulatory regime introduced, wholly wasted in so far as our sector is concerned.

The licensing of Private Investigators has been the subject of discussion for the best part of the twentieth century. The first public review was the Younger Committee on Privacy in 1970 set-up by the Home Secretary, Lord Chancellor and the Scottish Secretary.

The Committee was chaired by the Rt. Hon. Kenneth Younger. The Final Report was eventually published in July 1972.

Nothing changed for some years, despite the publicity afforded this Report, and the growing interest and concern about privacy. Then in 1972, the Cambridge Institute of Criminology headed a Roundtable Conference on Private Security.

The conclusions and recommendations were submitted to a House of Commons Home Affairs Committee which reported in 1995 on the Private Security Industry.

In turn, this led to the eventual regulation and the enactment of the PSIA 2001.

Whilst all this discussion was taking place mostly about the ‘uniformed’ security industry, our ‘fragmented’ sector operated without any form of regulation or statutory control.

Following the DPA and other regulation, more to do with policing rather than the private sector, many of us were becoming aware and conscious of changing attitudes and standards. These certainly were affecting both how the authorities and the general public would view our role in a changing society.

The Investigation Sector had two Trade Bodies up to this time, the ABI and IPI.

Rightly or wrongly both were perceived as not being “open” to all practitioners in the sector.

Resulting in a significant percentage of the estimated 10,000+ UK practising PI’s not being represented. Not belonging to nor wishing to belong to either body.

This led to a ‘secret’ meeting which took place in 1998 convened to discuss the creating of a new representative association for investigators.

Stuart, John Edwards, John Hope, Jim Tozer along with me huddled over endless coffee in Haywards Heath. Eventually, we all agreed that there was indeed, an urgent need for a new Association, a representative trade body – open to all in our sector.

This new Association would be open to all professional investigators in practice and transparent in both management and policies. It would be non-profit, no-one, management nor member would derive any personal financial benefit.

The main objective was to enable the thousands of investigators who were not aligned as members of an association to become represented. To have a voice in the mounting pressure of the decade – as we accelerated towards regulation.

The result of this secret meeting?

The World Association of Professional Investigators – WAPI was formally established.

The founder members convened their first formal meeting; becoming the first Governing Council in late 1999 – This ‘sprang’ WAPI into life!

The Chairman of the Association was myself with Jim Tozer being our 1st General Secretary.

WAPI was formally introduced to the broader PI world in early 2000 after the UK regulation was formally announced. There was a sudden move from the PI Sector to join one or more of the Associations. Most saw the value of being aligned with a representative Organisation.

WAPI anticipated that with a strong growing membership mandate (strength in numbers), there may be some wiggle-room; to negotiate with the Government as to the terms of the regulation.

The early years, however, were fraught with difficulties, just to become accepted by our peers took great effort and diplomatic negotiation. WAPI Governing Council worked tirelessly whilst still operating their own Agencies, earning WAPI a seat on the Advisory Groups to Government, the WFG – Way Forward Group and later the ISG (Investigator Sector Group).

WAPI then sat with the other Associations at the numerous “face to face” negotiations, firstly with the Home Office, later the Security Industry Authority (SIA).

WAPI was right there; at the right time. Voicing our members’ concerns, challenging the Government, later the SIA; on every issue which might have been harmful for our sector.

The WAPI GC held the most robust mandate at the table. Our own membership plus subscribers of the WAPI eGroup and UKPIN the largest eGroup for PI’s at the time.

Many of whom chose to be ‘non-aligned’ in respect of regulatory issues or concerns.

It was abundantly clear; the vast majority of Professional Private Investigators supported the concept of being licensed – the plus-side far outweighed any perceived negative factors.

The Bill was passed into law as the Private Security Industry Act 2001 (PSIA).

The WAPI Governing Council had invested considerable time and expense; all generously donated. The enthusiasm of the founder members undoubtedly enabled WAPI to earn a key position on the licensing debate. Today, WAPI membership stands at around 400 Members, and includes Private, Government, Law Enforcement and Specialist Investigators in the UK, EU and around the World.

One of the early decisions of the new GC was to provide an “open” eGroup – open to all Investigators. The “UK2” (WAPIGroupMembers@groups.io) was designed to disseminate the mass of information and concerns about the potential regulation. The transparency ethos adopted by WAPI recognised the need and saw the advantage of providing a free and open facility. Both our membership and the wider sector could be updated and raise concerns; without having to pay for membership of an association.

The original eGroup snowballed, gaining over 200 subscribers within days!!

Today the eGroup is over a thousand strong.

(The eGroup is currently moderated by Tony Smith – WAPI Chairman)

WAPI created and published a Proposal Document on Competence Criteria.

WAPI became both concerned and involved in respect of the competence criteria, a requirement specified in the PSIA in order to be licenced.

This was widely distributed to both the sector and the SIA (Security Industry Authority).

WAPI was and is in favour of a determination of “competence” being based on our published Proposal; Sector-based qualifications and/ or proven experience; rather than sitting an exam.

WAPI, together with other Sector representatives, participated in re-writing the National Occupational Standards (NOS) in Investigation approved by the UK Government regulators.

These NOS specify standards of performance that investigators are expected to achieve, and the knowledge and skills needed to perform effectively.

Over WAPI’s first twenty years, GC Members have attended numerous Sector-based events and have participated in major PI Conferences in both the USA and Europe.

WAPI has organised “open” Seminars to distribute regulatory news and subjects of use and interest to our members and non-members.

WAPI in conjunction with the ABI and IPI organised and hosted the well-attended “European Congress” in London.

We also participated and contributed with time and funding for various ISG and the widely acclaimed WAPI Seminars and Banquets.

Following the WAPI ethos, all events are open to all from the sector, whether or not a WAPI member.

The Hacking Issues were sprung upon the sector in 2007, reaching a crescendo in 2012.

Tony Smith for WAPI, presented evidence to the Leveson Inquiry into the culture and ethics of the press.

The WAPI Ethical Code is a standard that all members follow, and other stakeholders can have confidence in.

Membership provides professionalism to your persona, gives confidence to those with whom you deal, and provides a set of standards in both terms and ethics.

In this third decade of the century, our members enjoy, and profit from our “brand marketing” and benefit from the confidence of the instant trust placed in WAPI members by colleagues around the World.

To belong to a Professional Body demonstrates to all around of your competence.

That you are aware of Privacy, Data Protection, and the GDPR.

That you are updated about new and changing law and operational aspects of conducting investigations.

That you are a professional.

Your Association represents you.

Members are encouraged to participate in the running of the Association.

Consider being nominated to stand for election to the Governing Council each year.