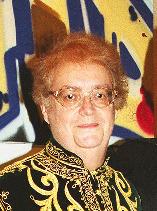 Miriam Ettisch-Enchelmaier BA is the first WAPI Honorary Member. She is a longstanding, respected and very well known German PI.

The Constitution of WAPI allows for a maximum of three Honorary Memberships each year, to be awarded to outstanding Individuals who, in the opinion of the WAPI Governing Council, have contributed in an outstanding way to the PI Profession as a whole.

The World Association of Professional Investigators was established in the UK in early 2001 to provide an alternative to the mainstream Professional Associations, which have failed to attract the vast majority of practising investigators into their ranks.

Since inception WAPI has generated a growing membership drawn from all over the world.

The Association has been one of the most active in representing to Government bodies the issues and concerns, not only of WAPI Members, but also the wider profession.

The WAPI Governing Council are pleased to recognise the achievements and positive contribution of Miriam Ettisch-Enchelmaier to enhance the PI Profession, and we are delighted that she has graciously accepted our first Honorary Membership.

Miriam Ettisch-Enchelmaier can be contacted at;