What WAPI Does for Members in Ireland

WAPI was created in 2000 as a Trade Association, to represent the Investigation Sector who for various reasons, were not Members of one of the only two existing Associations at that time. The newly proposed PSIA – Private Security Industry Act was shortly to become law, and Government had invited the Sector to provide input data as to the effect, cost and likely Issues in the planned regulation of the Private Investigator Sector.

Among those who decided to join, were a number of PI’s based in the Irish Republic, the concern being that most Investigators in the Republic would routinely cross the border into the North, which is part of the UK!! Plus, many also travelled to London and elsewhere in Great Britain in pursuance of their Cases. It was of serious worry to the Irish Sector as to whether that would become restricted in terms of cross-border and UK assignments.

The WAPI Governing Council immediately started negotiations with the SIA and the other Associations, and Egroups, on behalf of Irish members, and the Sector generally. WAPI sent Representatives to Irish Meetings and Discussion Groups, and opened communications with the Irish PSA after the 2004, and the later 2011 Act.

As the Irish Membership increased, WAPI notified the Private Security Authority of the Mandate that WAPI were entrusted with by the ROI Investigator Sector. Following the prosecution of a few PI’s in Ireland for Data Offices by Pretexting, the Irish Government rushed the implementation of Licensing of Investigators onto the Statute Book. WAPI organized a Sector Meeting in late 2015 inviting the PSA Chief Executive as the Keynote Speaker, and giving an unprecedented opportunity to those present to fire some search questions and concerns to the “Man at the Top”

WAPI also communicated with the Information Commissioner expressing concerns and extracting advice in the areas of Data Protection, and some clarification as to the use of “pretext” as an investigatory tool.

WAPI continue to represent our Members in Ireland, with Issues and Concerns on the vexed question of Regulation, and have engaged both Solicitors and Senior Counsel for Opinion as to the legality of the present Act.

There are a number of areas of concern, particularly in respect of the various EU Directives on Free Movement of Business and Commerce, and the Right (under EU Law) to operate a Business and to exercise a Trade free of overburdening regulation.

It is only a matter of time until such a Case will be a Challenge in the Irish and EU Courts – WAPI maintain a watch brief, and disseminate Updates through a WAPI eGroup, open to all Investigators in Ireland and elsewhere.

Irish Members have always been welcomed at WAPI organized Seminars, some in conjunction with other Associations, and our famous Annual Banquets – the highlight of the PI year!! 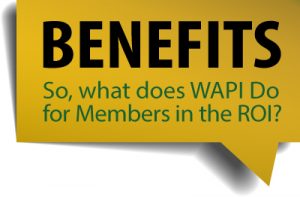 So, who does WAPI meet with on behalf of our ROI Members?

Get Qualified – Through the Academy of Professional Private Investigation