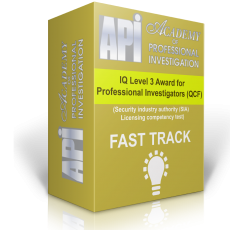 As no doubt you have seen from the recent posting regarding Baroness Henig question to Her Majesty’s Government, as to what progress they have made on the introduction of a system of regulation for private investigators, as announced by the Home Secretary on 31 July 2013. This has dramatically increased people’s awareness that regulation is likely to come into force sooner rather than later in the new parliament. Even more so, if the conservatives are returned to Government i.e. The Home Secretary’s promise that this would be implemented by the end of 2015. To that end on the Saturday morning prior to the evening Banquet the Academy of Professional Investigation, being WAPI’s preferred training provider, will be providing to all members and others attending the banquet the opportunity to obtain the necessary qualification in readiness for the forthcoming licensing of the private investigation industry.